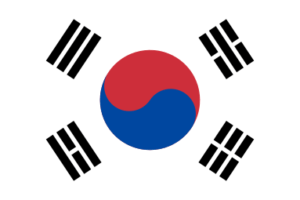 South Korea is a country in north-eastern Asia that occupies the southern portion of the Korean Peninsula. South Korea is bordered on the north by North Korea, on the east by the East Sea (Sea of Japan), on the southeast and south by the Korea Strait, which separates it from Japan, and on the west by the Yellow Sea. It has a total area of 99,268 sq km (38,328 sq mi), including numerous offshore islands in the south and west, the largest of which is Cheju (area, 1845 sq km/713 sq mi). The state of South Korea was established in 1948 following the post-World War II partitioning of the peninsula between the occupying forces of the United States in the south and the Union of Soviet Socialist Republics (USSR) in the north. The capital and largest city of South Korea is Seoul