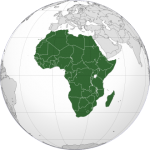 region is based on the United Nations geoscheme, which is a system which divides the countries of the world into regional and subregional groups:

Recently updated airlines in this region: