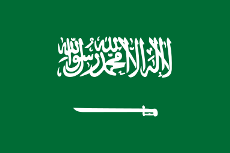 Saudi Arabia is a monarchy in south-western Asia, occupying most of the Arabian Peninsula. It is bordered on the north by Jordan, Iraq, and Kuwait, on the east by the Persian Gulf and Qatar, on the southeast by the United Arab Emirates and Oman, on the south by the Republic of Yemen, and on the west by the Red Sea and the Gulf of Aqaba. The country’s borders with Yemen and the United Arab Emirates are not precisely defined. Saudi Arabia has an area of about 2,240,000 sq km (about 865,000 sq mi). The capital and largest city is Riyadh.