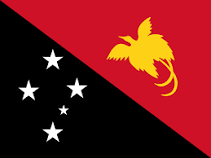 Papua New Guinea is an independent nation in the south-western Pacific Ocean, located north of Australia and east of Indonesia. Papua New Guinea occupies the eastern half of the island of New Guinea, called the mainland, and several hundred smaller islands. The western part of New Guinea forms the Indonesian province of Irian Jaya. Since the country’s independence from Australia in 1975, town and city life has expanded as villagers have migrated to urban areas in search of employment. Port Moresby, located on the mainland’s south-eastern coast, is Papua New Guinea’s capital and largest city