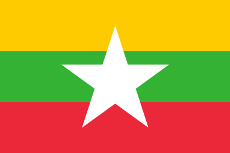 Myanmar is a republic in Southeast Asia, bordered on the west by Bangladesh, on the northwest by India’s Assam State, on the northeast by China’s Yunnan Province, on the east by Laos and Thailand, and on the southwest by the Andaman Sea and the Bay of Bengal. The longest land border is shared with China. Myanmar was formerly known as Burma until 1989. The English version of the country’s name was changed by the military government that took over in 1988. Yangon (formerly known as Rangoon) is the capital and largest city.