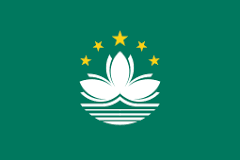 Colonised by the Portuguese in the 16th century, Macau was the first European settlement in the Far East. Pursuant to an agreement signed by China and Portugal on 13 April 1987, Macau became the Macau Special Administrative Region (SAR) of China on 20 December 1999. China has promised that, under its “one country, two systems” formula, China’s socialist economic system will not be practiced in Macau, and that Macau will enjoy a high degree of autonomy in all matters except foreign and defence affairs for the next 50 years. It is located in eastern Asia, bordering the South China Sea and China