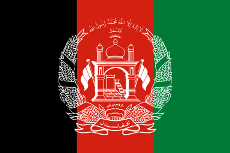 Afghanistan is a republic in south-western Asia, bordered on the north by Turkmenistan, Uzbekistan, and Tajikistan; on the east by China and the part of the disputed territory of Jammu and Kashmîr controlled by Pakistan; on the south by Pakistan; and on the west by Iran. Afghanistan was a monarchy from 1747 to 1973, when the king was overthrown by military officers and the country was proclaimed a republic; the republic dissolved in 1992 as the country erupted in civil war. Afghanistan lies across ancient trade and invasion routes from Central Asia into India. This position has been the greatest influence on its history because the invaders often settled there. Today the population includes many different ethnic groups. Most of the present borders of the country were drawn up in the 19th century, when Afghanistan became a buffer state, or neutral zone, between Russia and British India. Kâbul is the capital and largest city