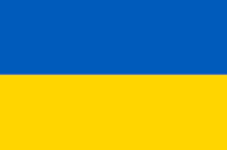 Ukraine is a country in eastern Europe, and the second largest country in Europe after Russia. Ukraine is bordered on the west by Poland, Slovakia, and Hungary; on the southwest by Romania and Moldova; on the south by the Black Sea and Sea of Azov; on the east and northeast by Russia; and on the north by Belarus. The Crimean Autonomous Republic-encompassing the Crimean Peninsula, or Crimea, in the south-is included in Ukraine’s borders. The capital and largest city is Kyiv (Kiev)