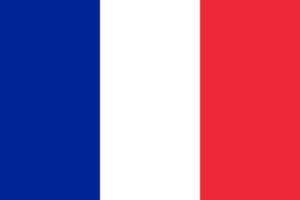 France is a republic in western Europe, bordered on the north by the English Channel and the North Sea (which separate it from Great Britain); on the northeast by Belgium, Luxembourg, and Germany; on the east by Germany, Switzerland, and Italy; on the southeast by Monaco and the Mediterranean Sea; on the south by Spain and Andorra; and on the west by the Bay of Biscay (an arm of the Atlantic Ocean). France is approximately hexagonal in shape, with an extreme length from north to south of about 965 km (about 600 mi) and a maximum width of about 935 km (about 580 mi). The total area of metropolitan France, which also includes the island of Corsica in the Mediterranean, is 543,965 sq km (210,026 sq mi). The capital and largest city is Paris.