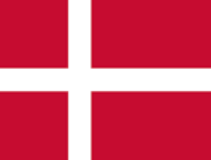 Denmark is a constitutional monarchy in north-western Europe, the southernmost of the Scandinavian countries. It is bordered on the north by the Skagerrak, an arm of the North Sea, on the east by the Kattegat (an extension of the Skagerrak) and the Øresund, a strait linking the Kattegat and the Baltic Sea, on the south by the Baltic Sea, a strait called the Fehmarn Belt, and Schleswig-Holstein, Germany, and on the west by the North Sea. Denmark comprises most of the Jutland, or Jylland, peninsula, which extends about 338 km (about 210 mi) in a north and south direction, as well as numerous islands in the Baltic and North seas. The principal islands, lying between the mainland and Sweden, are Fyn, Lolland, Sjælland, Falster, Langeland, and Møn. About 130 km (about 80 mi) to the east of Sjælland, in the Baltic, is the Danish island of Bornholm. Far to the northwest of Jutland, in the Atlantic Ocean, between the Shetland Islands and Iceland, lie the Faroe Islands, a group of 18 islands, part of Denmark since 1948; and near the North American mainland, between the North Atlantic and the Arctic oceans, is the island of Greenland, an integral part, from 1953, of the Danish monarchy. Both the Faroe Islands and Greenland are internally self-governing. Excluding these islands, Denmark has an area of 43,094 sq km (16,639 sq mi). Copenhagen (København) is the capital and largest city