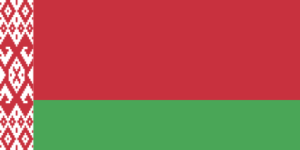 Belarus is a landlocked republic in east central Europe, bordered by Russia to the east, Ukraine to the south, Poland to the west, and the Baltic republics of Latvia and Lithuania to the northwest. Nearly 80 percent of its people are ethnic Belarusian, and about two-thirds of its population live in urban centres. Belarus has a centrally planned economy dominated by state-controlled heavy industry. Its government is a presidential republic in which the executive is the chief authority. The capital and largest city is Minsk, located in the centre of the country