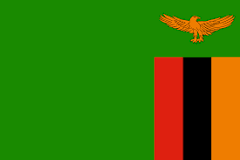 Zambia is a republic in south central Africa, formerly known as Northern Rhodesia. Bordered on the north by the Democratic Republic of the Congo (formerly Zaire) and Tanzania on the east by Malawi on the southeast by Mozambique on the south by Zimbabwe, Botswana, and the Caprivi Strip of Namibia; and on the west by Angola. The area is 752,614 sq km (290,586 sq mi). Zambia’s capital and largest city is Lusaka