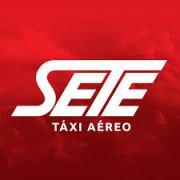 SETE Linhas Aereas was formed as an air taxi company in 1976 when Rolim Adolfo Amaro, also founder of TAM Airlines, created an airline specialised in general aviation and maintenance. The airline was sold to Luis Roberto Villela in 1980. Licensed to to operate passenger services in 2006 under the name of SETE Linhas Aereas. In spite of being the main regional airline of both Central and North-Central regions of Brazil all regular services were indefinitely suspended on 31Dec2015. SETE Linhas Aéreas (1999-2015) merged into SETE Táxi Aéreo

Do you have any extra history about SETE Taxi Aereo to add or any of our other airlines in database? Click here to contact us now and get your information added to the airline history database.