Karair was founded in 1947 as Karhumaki Airways. Began scheduled services in Jun1951. Started operations as Karair in Jan1957. Move into Finnair was completed in Sep1996
[ – The charter establishing the Aero Oy was signed in Helsinki on 12Sep1923, registered on 01Nov1923 with it’s first flight on 20Mar1924. In 1941 the airline adopted the title of Finnish Air Lines but the name didn”t change and eventually renamed to FINNAIR on 25Jun1968. Finnair became the first airline to operate a non-stop service from Europe to Japan on 22Apr1983. Acquired FINNAVATION and KARAIR in 1996
~ International and domestic, passenger and charter carrier] 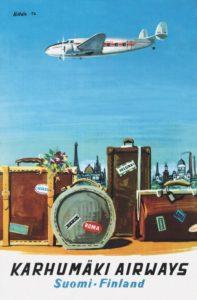 Do you have any extra history about Karhumaki Airways to add or any of our other airlines in database? Click here to contact us now and get your information added to the airline history database.