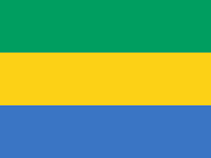 Avirex was formed in 1989 as a bush outfit operating a Cessna 207 and a BN2 among others, mainly to supply the timber camps in the backcountry. In 1999, it was taken over by Philippe Salles (CEO) who was one of their customers. He secured other timber contracts using a Cessna 402, a Cessna 404, a Piper PA31 Navajo and a Reims F406, along with a Perenco oil contract using two Beech 1900C. He also opened scheduled domestic passenger services with the 1900s. In 2002, Avirex took an ATR42. Around 2004, it took a Fokker 28, and later on a DC9-32 joined the fleet. Renamed to Jet Express Gabon in 2007 – Domestic scheduled carrier linking the main towns and cities within Gabon. Based out of Libreville
– [Jet Express Gabon was an entity created by Philippe Salles that owned the airplanes (F28 & DC9), but the airline was always called Avirex. The title on the airplanes was “Avirex, operated by Jet Express Gabon”. The carrier appears to have ceased operations around 2017]

Do you have any extra history about Avirex to add or any of our other airlines in database? Click here to contact us now and get your information added to the airline history database.