Inter European Airways (i) was formed in 1978 and adopted the name Air Europe in 1979. The carrier began operations on 04/May/1979 and ceased on 08/Mar/1991 and declared bankruptcy
< operated scheduled and charter flights based out of London Gatwick Airport and Manchester Airport > 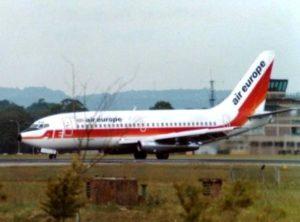 Do you have any extra history about Air Europe to add or any of our other airlines in database? Click here to contact us now and get your information added to the airline history database.