– [KLM uk was originally formed by the merging of AIR ANGLIA, AIR WALES, AIR WEST and BRITISH ISLAND AIRWAYS into a single airline and called AIR UK. Scheduled international, regional and domestic passenger and cargo airline. Renamed to KLM uk in 1998]
– [NetherLines was formed on 01Feb1984 and started scheduled flights on 08Jan1985. Merged with NLM Cityhopper and KLM (uk) to became KLM CityHopper on 01Apr1991 with operations starting on 30Jun1991] 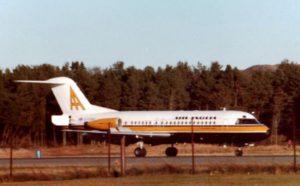 Do you have any extra history about Air Anglia to add or any of our other airlines in database? Click here to contact us now and get your information added to the airline history database.