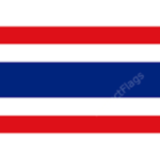 In 1930, it was decided to relieve the military of the mail and passenger service. On 03Jul1930, the
first Siam commercial airline was formed, the Aerial Transport of Siam Company (ATSC). In 1931, the airline took delivery of the first two of four de Havilland Puss Moths. Aerial Transport of Siam Company (ATSC) was re-organised and renamed to SAC (Siamese Airways Company). SAC began operations on 01Mar1947. Thai Airways (TAC) was formed on 01Nov1951 by the amalgamation of (SAC) Siamese Airways and Pacific Overseas Airlines (Siam)

[ – Thai Airways International was formed as a joint venture between SAS and TAC (Thai Airways Company) on 24/Aug/1959 to operate international services. The carrier’s first revenue flight was on 01/May/1960. Thai Airways Company (TAC) merged into Thai Airways International on 01Apr1988. First operator of Shorts 360 Adv in 1986. THAI launched a regional carrier with light-premium services, Thai Smile, which operates the narrow-bodied Airbus A320-200 on regional and domestic routes. The new airline began commercial operations in Jul2012
< international and regional passenger and cargo airline based out of Bangkok–Suvarnabhumi. It is the flag carrier of Thailand > ]

Do you have any extra history about Aerial Transport of Siam Company (ATSC) to add or any of our other airlines in database? Click here to contact us now and get your information added to the airline history database.